We may earn money or products from the companies mentioned in this post.

Since his famous, and to some, infamous, death at the hands of Doomsday in the early 90s, Superman comics have been struggling both creatively and commercially.

While the character is as loved as he has ever been by his fans and comic book readers in general, writers, artists, and DC editorial in general, have struggled to produce a Superman run that captures people’s attention and appreciation on a high level.

The New 52 reboot didn’t do the Man of Steel, or many others DC characters, much good. By and large, it was viewed as a commercial and creative failure because these iconic superheroes were changed considerably. Then Rebirth, led by writer Geoff Johns started in 2016 to bring back these characters to their best with Superman benefitting from this the most, having writer Peter Tomasi doing the Superman title and legendary writer Dan Jurgens doing the Actions Comics title.

One of the first stories Tomasi did was Trials of the Super Son. The paperback trade shows Clark, Lois, and their son, Jon, adapting to their life on this new Earth and having a couple of adventures that, while not groundbreaking, fulfill the most important part: to tell good stories.

What is Trials of the Super Son?

It isn’t so much a single linear story, but rather a compilation of multiple stories that show Superman and his family adapting to this particular world. It’s worth pointing out that this is the pre-New 52 Superman, so he is on a different Earth. It sees Clark going to the county fair with Jon and Lois, adventuring to an island with Jon and a World War II veteran, Jon interacting (and clashing) with Batman’s son, Damian Wayne, a big misunderstanding with Swamp Thing, and even Lois and Clark having to deal with an alien couple that wants to destroy people. If anything, this series of stories is focused on establishing the Man of Steel in the then-new Rebirth continuity and showing how things are going to be from now on.

Peter Tomasi is, if anything, a competent writer. He is one of those interesting cases of writers in comics that perhaps never get a lot of credit or spotlight, but they rarely write a dud or make negative changes on a character. If he can’t make it better, he would at least try to make it as good as it has been so far. In that regard, I think he was a good choice to write the Superman title during the Rebirth years because he provided the Man of Tomorrow and his family with what they needed at this point of their history in comics: stability and going back to the roots. Sure, Supes being a father was something new and fresh, but this isn’t the moody and emotional Superman of the New 52 but the classic, heroic Superman that is known worldwide, so Tomasi and company added a new element, Jon Kent, but did so while maintaining the title character’s core values. And this trade paperback is so much fun and wholesome. If you’re tired of comics that are dark and depressive, then this volume and run as a whole is perfect for you. It shows the Kents adapting to their new lives, Clark adapting to being a father, we see Jon’s development in every story and, overall, we get fun adventures that have interesting lessons along the way. Believe it or not, the county fair storyline might be my favorite story of this volume. Why? Because it doesn’t rely on big battles or monumental conflicts to get people’s interest and attention, as it’s often the case with writers when they get to work with Superman. Tomasi on the other hand tries to focus on making the characters’ personalities and interactions the selling point, which I think it works. It’s a volume (and a run) that has great action but mainly focuses on characterization which I think is why it has been so highly regarded by Superman fans throughout the years.

How was the art? 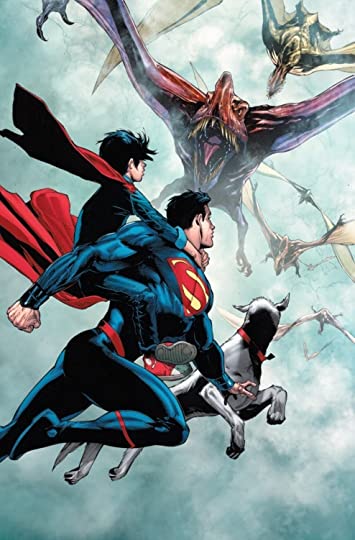 If you have Patrick Gleason, Jorge Jimenez, and Doug Mahnkedoing interiors for you, then you can be sure that the art of your comic book is going to be world-class. And that is exactly the case with Trials of the Super Son. The art is breathtaking and every panel has some of the finest aesthetics of the Rebirth initiative. As an interesting point, this was around the time that Jorge Jimenez started to make a name for himself in the comic book industry, and for good reason. His pencils are detailed, fun and he has a knack for adding a bit of humor through the characters’ facial expressions, which makes suits a lighter tone comic like this Superman title. I think he is one of those artists that suit Superman to a T. But overall, all three artists do a phenomenal job and deserve a lot of credit in all the pages that you find in this volume because it’s a gorgeous set of comic book art.

Trials of the Super Son is not groundbreaking stuff when it comes to comic book storytelling, but it doesn’t need to be, nor does it aim to. So this is a bit of a moot point, honestly. What’s important is that it is a compilation of quality Superman stories that are respectful to the character’s legacy at a time where a lot of people seem to have a problem with the Man of Steel’s core values. It was also a great way to introduce and develop Jon Kent’s character, who quickly became a fan favorite (let’s just ignore what Bendis did a few years later). If you are looking for good Superman stories with a light, wholesome element, then this trade is perfect for you.